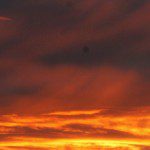 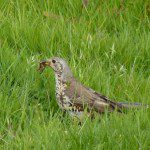 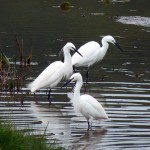 Steve Waite writes ;- “I hadn’t seen or heard a Cuckoo on patch for at least seven years – and have only heard/seen three ever. So as I was driving between Southleigh and Colyton, I came to a sudden halt when I saw a Cuckoo perched right besides the road! Unfortunately, the stopping of my car made it take to the air. A couple of Swallows chased it as it flew towards a near by wood, but it U-turned and flew back low over the road – heading for a large Oak tree.”

Recent photos by Steve – a Mistle Thrush with hungry mouths to feed, and three Little Egrets.

A Hobby was seen by Ian Maclean over Colyford Common on 29th, and on the same day there were approx 40 House Martins at Black Hole Marsh.  The Reed Warblers and Reed Buntings can still be heard there, but seldom seen! 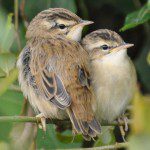 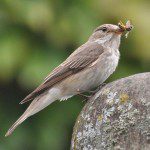 Images from Black Hole Marsh –Young Shelduck and two young Sedge Warblers, and one from Colyton – a Spotted Flycatcher all by Susan Smith.

Peter Mason tells me there are Pyramid Orchids on the Seaton Hole to Beer Cliff path.

Maggie Dilley asks  “Did anyone else notice how “happy” the birds seemed to be after that rainy  Sunday’?   Our bird feeders were busy all day with many birds and many young – Blue Tit, Goldfinch, Greenfinch, Nuthatch, Woodpecker, and even a young Bullfinch (had to look that one up in the book!). We also had a Mistle Thrush that sang all day from most of the tall trees in the garden.  A bit after the event but we have been putting apples out again for the Blackbirds which they seem to appreciate.” 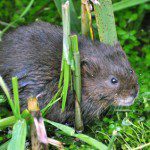 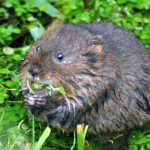 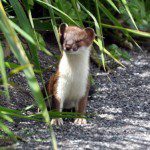 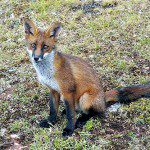 The Water Voles have been showing well near the Tower Hide recently.  Sue Smith saw six, and managed two lovely photos, and even I saw one on the 29th!  And on the next day a Stoat showed as well. For good measure, a Fox Cub also joined the party.

A Lens Cap for a Sony camera has been found, and is currently in a locked notice board at Black Hole Marsh Island hide.  Please contact me on 01297 552616 if you have lost one.

The Log Books at Colyford Common and Seaton Marshes, seldom used and sometimes defaced, have been removed, so please tell me if you see anything of interest there.

Another excellent catch on 23rd June of 60 birds with some interesting retraps, including a House Martin the Group ringed in 2009. The tally was:

The rampant undergrowth invading the paths would have soon meant wet legs and nettle stings, but thanks to Dave Palmer, our Countryside Ranger, they have all been cut back.  He is also called in to clear the paths of fallen trees and limbs after storms, and helps with keeping open the glades that have been created. The rabbit numbers are well up this year, so I am very surprised that there are as yet no young Buzzards calling in or over Seaton Down Coppice. It is a long time since I have seen any Long Tailed Tits but there are 4 Chiffchaffs calling loudly and 3 Blackcaps singing in their territories. Bird numbers are generally down, and we cannot blame the squirrels as I have only seen one over the last month. I think two bitter snowy winters can be blamed for the low number of feisty little Wrens. Checking in the fields along the North side of the Woods, I have seen 2 Mistle Thrush, and 1 Green Woodpecker though I have been told 2 young Green Woodpeckers were seen recently near the bridleway.  This morning Paco disturbed a hen Blackbird feeding 2 juveniles on the way to my seat. Also the peace of the Woods was shattered with a group of children from Seaton Primary School learning about the different types and texture of tree bark.  They were very happy to be out of the classroom. I spoke to one boy who said his parents often bring him and his sister to Holyford which is good to know.

Because I am worried about the fewer numbers, I have recently made a donation to the Corvid Research Project Appeal for Songbird Survival.

This is their address for donations on line:-

Note:- Last week I was travelling from the 3052 to Axmouth when I spotted a Red Kite being hassled by a Buzzard.  By the time I could park, and get my bins out, they had flown East towards the North side of Hawkesdown Hill. They are such a wonderful sight, and hopefully we will have them breeding here. Jean Kreiseler 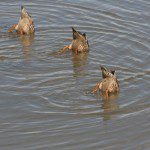 Up Tails All – Photo Carol Lowe