NB: The following is reproduced by kind permission of Axe Estuary Birds. Full credit goes to the team that produces the newsletter (see the bottom of the post for specific details). Photographs are credited throughout the text although we are working to preserve the original layout wherever possible in the future. 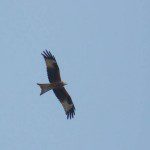 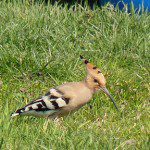 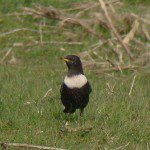 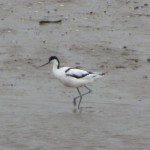 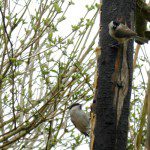 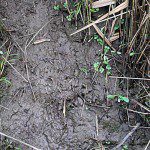 A Red Kite was seen over Black Hole Marsh on 24th which was a pleasant surprise.  These magnificent birds seem to be expanding their territory, so may be we will see them more frequently.  Presumably the same bird was seen at Beer Head later in the day.  On the same day John Stentiman witnessed a Sparrow Hawk swoop down and take a Pigeon in his garden, carry it to some bushes and make a meal.  He then noticed a number of Gulls scatter in apparent panic, looked up and spotted an Osprey, the first reported this spring

There has been a Hoopoe on patch, which was snapped by Steve Waite in the Seaton area.

Steve also writes “A few hours at Colyford Common/Black Hole Marsh this morning was lightened up no end when a Red Kite came flying north over the reserves just before 9am….It was easily the lowest flying one I’ve ever seen on patch- passing just above tree top height!”. He later took this picture over the house.

And Karen Woolley writes “This morning saw me taking my seventh walk to Branscombe and back and this time I actually saw some nice migrants. On reaching Branscombe I noticed a couple of Wheatears down on the grass by the car park. I was just rushing down to get a closer view when a dog walker flushed them. They came towards me and the couple turned out to be 18! It’s always a real thrill to see your first Wheatear of the year.  I didn’t see any more birds on Beer Head at first, apart that is for a few small flocks of Meadow Pipits going over. I was just approaching The Dell, checking for Adders in the adjacent field when I spotted what looked like a male Ring Ouzel, it was a long way off but unmistakable, it was definitely a Ring Ouzel. My first spring one on Beer Head.”

Stop Press!  An Avocet on the River this afternoon – the 31st – photographed by Sue Smith

Simon and Sue Wakely write: “A garden first today, and a First ever for us. 2 Marsh Tits in the Frame, just wish there was more light –  that’s Birding,  Hope you enjoy them, we were delighted.”

A new Backwater Birding Thread has been started on Bird Forum.  The address is below, and already it is well worth looking at – and indeed posting your comments and sightings.

Instead of 1 Chiffchaff I have been hearing 6 both inside and outside the woods, together with (seen and/or heard) 3 Green Woodpeckers, 3 Greater Spotted Woodpeckers drumming, 6 Pheasants, 2 Jays, and 2 Blackbirds, 2 Song Thrushs and 1 Mistle Thrush singing, Rooks and Crows – inspecting the tops of the trees in Holyford Coppice, 5 Goldcrests in the willows around Top Pool, 3 Buzzards plus  numerous LBJ’s. On a perfect spring morning Mike Lock, AVDCS Chairman, led an interesting stroll looking at flowers and plants in detail. The floor of the wooded areas is becoming a glorious golden mat now that the Golden Saxifrage has joined the Primroses, Lesser Celandines and Moschatel. We found several spotted leaves of the Early Purple Orchid at the top of Holyford Coppice, and a few early Violets. Dog’s Mercury is prevalent here and lower down too, a clear indication of an ancient wood. The Gorse on the sunny slopes of The Hangings is in full flower. One occasion I was looking at the flowers when I realised the shrub was crowded with Ladybirds, probably emerged from hibernation in the bark of an Ash Tree alongside.  Several Buff-tailed Bumble-bees have been patrolling around. The Roe Deer now spend  more time out in the surrounding fields, enjoying the fresh grass.  The warm sunny newly-cleared bank beside Top Pool is regularly enjoyed by 1 Peacock, 1 Comma and 3 Brimstone butterflies. Now birds are beginning to nest, Squirrels have returned from the urban ‘feeding stations’ they have enjoyed all winter.

I think this has been the loveliest March I can remember.  Sitting on the log seat beside Top Pool has been a joy, especially as it is a favourite spot now for the butterflies. Jean Kreiseler. (There will be no report from Jean in the next issue, as she is off to the Okavango Delta.)

There were six cannon-net catches this winter.  One other catch was aborted thanks to the activities of Mr. Reynard, the Fox. We caught and processed a total of 399 birds (including retraps/controls, but excluding one Pheasant duly released!) comprising of 341 duck, 54 waders, 2 Geese, 1 Corvid (Crow), and 1 Moorhen. There were no injuries during this period which was due to careful planning and to an excellent team effort. Colour-ringing of Shelduck took place during the winter as well as a few Black-tailed Godwits.
The catch on 26th totalled 32 birds comprising of 3(1) Mallard and 29 (23) Shelduck.
Our short mist-netting session last Thursday comprised of 15 birds: Bullfinch 2; Long-tailed Tit 1; Dunnock 5(4); Chaffinch 1; Robin(2); Wren (3); and Reed Bunting 1.

Lynda Weare writes “Not a bird, but we saw a Hummingbird Hawk Moth in the lane near Bruckland Lakes. Thought it a bit early, but then the weather has been so warm it’s enough to fool anyone!”

We have a pair of Mallard visiting our garden in Colyford – they wait outside the front door each morning waiting to be fed.  Probably the same pair as the last two years, with a good memory!

Now here is an interesting photo, taken by Peter Mason at Colyford Common.  He thinks it is of a mud slide created by an Otter – you can just see a paw print if you look carefully.

The most numerous were Goldfinch, but this was due to a roost in one garden with no less than 48 individuals out of the 167 recorded. The next most numerous bird was the House Sparrow, which seems surprising, with a tota1 of 152 birds seen in 28 of the 39 gardens surveyed.  Starlings, which can second in the RSPB report, did not feature in our top ten. (The RSPB results can be seen at http://www.rspb.org.uk/birdwatch/results.aspx.)

Once again, Blackbirds were seen in all but one garden, and this year so were Robins.  In terms of most seen, the top ten were Blackbird, Robin, Dunnock, Wood Pigeon, Blue Tit, House Sparrow, Chaffinch, Great Tit, Goldfinch, Greenfinch, Wren and Long-tailed Tit.  In all, some 67 species were seen, including Grey Heron, Tawny Owl, Snipe, Lesser Redpoll and Red-legged Partridge.

If you would like more detailed results please let me know.

Work has now started on the Tower Hide at Black Hole Marsh. This is located at the southern end of the Marsh, quite close to the river. It is hoped it will be finished by Easter.  The ‘access for all’ path to it is already there, and the hide will be on stilts, with a few steps up to it affording great views of both the lake and the estuary.