Back again with an update from the prolific Steve Waite, who aside from his own fantastic blog has been kind enough to compile a July update on the various species around Lower Bruckland. As always, huge thanks to Steve for sharing his findings. 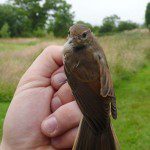 Although autumn seems a long way off to us, it is well underway in the bird world. The first signs were on the 15th during a very productive bird ringing session, when a Common Whitethroat (pictured right) was trapped and ringed, a species which doesn’t breed at the Ponds. Also on 15th a Green Sandpiper flew over heading west towards the Estuary, a bird that breeds in the far north east corner of Europe and beyond into Russia. By the end of the month the trees were full of migrant birds feeding up before their long migration south, including a few Willow Warblers and a Spotted Flycatcher. Overhead Sand Martins could be seen flying back south towards their wintering grounds in Africa, and on the ponds were the first returning wildfowl with three Tufted Ducks (pictured below) and two Gadwalls. 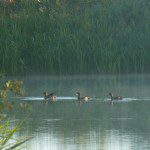 There’s still plenty of young birds about, notable Coot, Moorhen and Little Grebes, and of course the Mute Swan family than can always be found in the area.   Young Kingfisher can also now be encountered daily, but you have to be lucky! Learning their distinctive call will help your chances no end.

It’s been great to see healthy numbers of the rare Small Red-eyed Damselflies in recent weeks also, this was the first breeding site for this species in Devon (pictured below right). 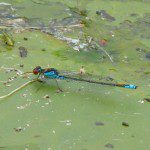 Finally, another treat from the ringing session on 15th was a magnificent Sparrowhawk (see below), this one a young male. The presence of this species at the Ponds shows just how many small birds are present here, because without small birds you simply wouldn’t have Sparrowhawks. Just look at those eyes! 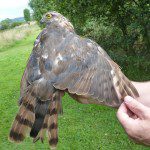 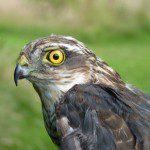