As always, many thanks to Axe Estuary Birds and contributors for the work they do, and for allowing us to republish the newsletter here. 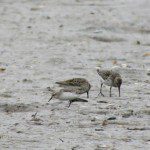 A patch first!  On Saturday last there were reports of a Little Stint with the Dunlin on Black Hole Marsh, so Steve Waite went to look.  It didn’t seem quite right, and when he got a better look in better light it proved to be a Semi-palmated Sandpiper.  Definitely a first for the estuary.  They breed in Canada and Alaska and winter in the southern states of America and are rare but regular vagrants to western Europe.

At last!  An Osprey 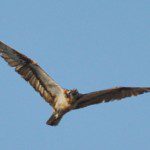 over the Axe yesterday, 29th ..  It flew off down the river but we don’t know if it went out to sea or not.  Photo Sue Smith 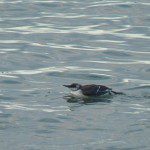 Steve Waite wrote on the 21st “There are rare waders everywhere and the Isle of Scilly have got a whole host of stunning American goodies. Even just down the coast, at Exmouth, yesterday’s rain and winds ‘wrecked’ three Sabine’s Gulls and a Grey Phalarope. Seaton Bay’s best offering this morning was a Guillemot . There were also five Sandwich Terns offshore, and on the beach were three Wheatear, 25 Dunlin and a Curlew Sandpiper.  There seemed to be a few Wheatear about today, with ten on Colyford Marsh, where there were another seven Dunlin. Black Hole Marsh was weirdly quiet, with three Greenshank and a Ruff over. Over the last couple of days I’ve heard/seen the first few Siskins of the season going over”. 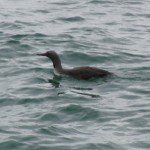 This Red-throated Diver was seen in the bay just off the yacht club in Seaton by Sue Smith.

Stewart Moss was surprised to see a completely black Pheasant and a pure white on fields near Colyton.

Maurice Budden visited Black Hole Marsh on 20th September and saw  c30 Dunlin, one Curlew Sand, two Greenshank,  15 Black-tailed Godwit, One Common Sandpiper.  And on the same day at Colyford Common there were eight Black-tailed Godwit, and c 25 Curlew, while at Seaton Marshes he saw 29 Redshank on the estuary.

Peter Mason writes “Hummingbird Hawk Moth on the reserve last Friday (our first sighting of the year). Also a Painted Lady (lack of these confirmed by the butterfly count results if I remember rightly). Always a pleasure to see a HBHM!”

At Black Hole Marsh, the new classroom at Stafford Marsh, next to the Field Studies Base is very nearly completed, and really is a wonderful addition to the facilities.  And work continues in the FSB on the illustrated ceiling panels.

And now for something stoataly (sorry !) different!  Steve Waite went to his fiancée’s house to watch some football, and found the furniture in disarray, as a creature had been seen lurking.  A long search revealed this Weasel hiding under the electric fire!  It was eventually captured and released back into the wild. 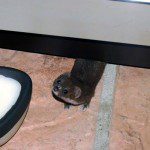 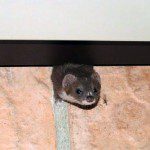 Recently there have been some lovely still days to enjoy.  Blackberry picking means I can concentrate on listening to bird calls all around me.  Robins have been engaging in their quiet little chatter, hardly heard when the wind is blowing.  I enjoyed the calls of 2 Chiff Chaff on The Hangings, busy feeding in an elderberry bush, ready for their long journey. There have been 2 Jays calling among the oak trees, regulars at this time of the year.  Other birds seen and/or heard have been a Tree Creeper, Nuthatch, a flock of Gold Crest, bossy Wrens, Blue, Great and Coal (or was it Marsh) Tits,  Raven and the other regular  Corvids, Greater Spotted and Green Woodpeckers, Chaffinch, a solitary Buzzard, a Sparrow  Hawk, and the Goldfinches on the thistles on The Hangings. The Roe buck has been scraping the ground among the Ramsons once again, exposing their bulbs, so the false rut continues. Spindle berries are beginning to turn bright orange on the tree beside the path to my seat, though the best are on the heavily loaded trees hanging out into the field there. Jean Kreiseler

The group have had its first international  recovery of a Shelduck   gc13777 that  was ringed as an adult female on the  1st  February 2006   the first ever Axe catch   It has not been retrapped since, which  is fairly remarkable  considering our recapture rate. It was reported found dead  in Friesland, Netherlands  2017 days  and  659 km  on 11th  August this year so was most likely  on moult  migration. We have also had our first out of county resighting of one of our Shelduck   gc64444  first ringed on March 5th   this year and retrapped on the 26th  .  It was then reported through  Euring  online  being seen on uphill beach  Western Super Mare  on the 5th  September   this year . Neil Croton.

Birds for Beginners (Meet the Birds) sessions are every Thursday at Black Hole Marsh, except 6th and 27th   October when they will be at Seaton Marshes Hide, all at 10.00 am.

Mike, Jean, and David.  (and many others!) davidwalters@eclipse.co.uk.   7 Springfields, Colyford, EX24 6RE.

And to finish this edition, two lovely pictures from readers’ gardens. 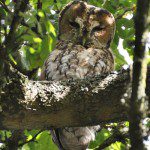 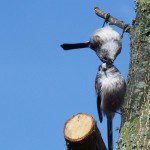