Sadly, this hide has been damaged by a deliberate fire, and the floor judged to be unsafe.  So the hide is closed to visitors, but it is hoped that repairs will enable it to be reopened before too long.

There was a Ring Ouzel on the  path to Colyford Common on Thursday 27th  morning . Ian McLean only had my digi-scoping camera with him so did not manage a photo.  A Spotted Redshank was still present that morning. 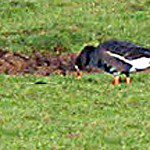 Steve Waite writes “I came across a bird whilst scoping from the Farm Gate in Axmouth – a stonking Greenland White-fronted Goose!  I have seen and found several Eurasian White-fronted Geese from the very same place, and the first thing I noticed when I came across this bird was how dark it was. I knew it was going to be a Greenland even before I saw its bright orange hooter – which obviously clinched it! I sent the texts out, and I understand the bird is still with us so I hope everyone who wanted to see it did so.”

There was also a Spotted Redshank viewable from the Farm Gate, walking around and feeding in the small pools on Colyford Common. 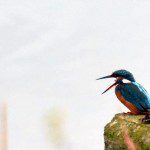 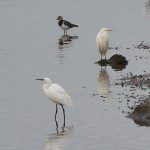 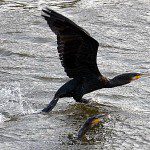 Sue Smith has been busy with her camera again, and above are just a few of the photographs she has sent me, which I particularly like.

Tim Frost writes “It’s probably something you’ve seen often, but my wife and I were fascinated when sitting in the car park at Beer Head and were watching about 30 Pied Wagtails feeding on the ground, when a Sparrowhawk swept in amongst them. However, far from being intimidated, they en masse mobbed the predator until it flew off into a nearby tree. The Wagtails then departed in their own time. The Sparrowhawk did not follow, obviously seeking less stoical prey.”

Ann Smith tells of seeing a Short-eared Owl on the cliffs east of Budleigh Salterton.  Several others saw it too – she was glad to have confirmation!  She also saw an Avocet on the river from the Tower Hide at Black Hole Marsh.

Marjorie Waters has been having a clear out and found some prints of Thorburn paintings   10″ / 8″.  She was going to frame them at one time but didn’t get round to it.   “They could be  put on a block and varnished as a quick option I suppose but only Birders would want them.  Grey Phalarope.  Black Guillemot.  Grey Plover/ Kentish Plover/ Sabine’s Gull/  Ivory Gull.”  There are three copies of each  If you are interested please contact her at marjoriewaters@waitrose.com

Another spell of lovely weather, with one day of high winds to shake things up a bit.  It has been difficult to walk beneath the oaks without being ‘pinged’ with acorns, and walking on some paths it is ‘snap crackle and pop’ as one  scrunches on the thickly strewn beech mast,  ripe acorns and dry twigs. The holly trees which regularly have berries are smothered this year, and the masses of spindle capsules  are bursting open to reveal the bright orange seeds. Making my way across the field one time, I stopped to enjoy 5 Ravens over the hillside rising on the thermals,  then wheeling and swooping.  It was not long before a Crow joined them but was soon drawn away with the appearance of a Buzzard to hassle. One morning I was standing on the bottom path while Paco was thinking he had seen or heard something interesting, when a Sparrowhawk swept past us in pursuit of a small bird. They vanished round the corner, so there was no way of telling if the quarry escaped. Now leaves are turning colour on the saplings on The Hangings, it is easier to record those that are quite well grown. I have noted Beech, Oak, Willow, Birch, Ash, Hazel and Hawthorn. The evergreen Holly is also appearing. Among the many rabbits in the surrounding fields, sadly there are some suffering with myxomatosis. As always when numbers are high it appears again.  Hopefully it will not be enough to reduce significantly the main food supply of the 3 Buzzards. The local foxes look healthy now after suffering mange last year.

The catch on the 20th  included: Song Thrush 2; Dunnock 4; Reed Bunting 4; and White Wagtail 1. White Wagtails are now migrating from Scotland and further north and the occasional one is seen locally. Mike Tyler was lucky to catch one on Thursday at the Colyton STW, together with Pied Wagtails.

Steve Waite has been busy building a blog for the Group and it is now up and running. Please check it out at http://axeestuaryringinggroup.blogspot.com  Congratulations to Steve for his work.

Here is a reminder of other websites worth looking  at regularly.  If you know of others, please let me know

Mike, Jean, and David.  (and many others!) davidwalters@eclipse.co.uk.   7 Springfields, Colyford, EX24 6RE.